open
Receive the best deals in your mailbox?
Then subscribe to the newsletter now!
Login
Log in if you have an account
Register
By creating an account with our store, you will be able to move through the checkout process faster, store multiple addresses, view and track your orders in your account, and more.
Create an account
Laat mij weten wanneer weer op voorraad is!
Laat je e-mailadres achter en we sturen je een mailtje wanneer dit product weer op voorraad is.
Share
Share this product
Add your review
Review TaylorMade Stealth Driver 2022 - Fujikura Ventus 5 Red Shaft
Home TaylorMade Stealth Driver 2022 - Fujikura Ventus 5 Red Shaft

Article code TM022D8274
€629,00 €559,00
3 in stock
Groundbreaking for 2022 are the spectacular TaylorMade Steath Drivers. A unique, all-carbon clubface complemented by top-notch technology from the previous (Sim2 Max) collection. Even better weight distribution for more explosiveness and forgiveness.
Available directly from our own stock!
Golf clubs, golf sets and more.
Description
Specifications

By constantly developing technology and continuously bringing new golf innovations TaylorMade has acquired a leading position in the golf market when it comes to drivers, fairway woods and hybrid clubs. Well done because there is quite some competition in this industry.
This year it is the TaylorMade Stealth driver that steals the show with a full carbon clubface. This makes the club according to International Rules not a Metal Wood but a Carbon-Wood. The all-carbon face, along with the successful technology from last year's Sim2 collection, allows for even better weight distribution. This generates even more power and forgiveness. 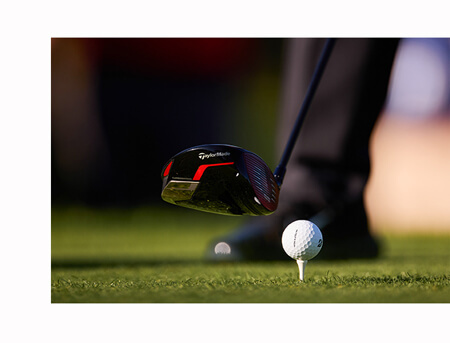 The Stealth driver from TaylorMade is available in this 'normal' version, the 'HD (= High Draw) version but also in the 'Plus' version. The differences between these versions are quite obvious. The Stealth Plus driver not only has loft adjustability but it is also balance adjustable. The sliding weight on the sole shows this. The Stealth and the Stealth HD are only adjustable in loft where the Stealth HD has a Draw setting. This makes it easier to hit a draw (ball flight over right) or to prevent a slice. This draw balance makes the Stealth HD most interesting for less experienced golfers. The Stealth Plus driver is better suited for the golfer who is looking for the widest possible range of adjustment in order to adapt the trajectory of their drives. Due to the different weighting, the flight of that model is a bit lower and therefore a bit further.

This TaylorMade Stealth has a face/clubface that is constructed of 60 layers of Carbon rather than the usual Titanium or Aluminum. The reason TaylorMade developed this is because Carbon is much lighter and at least as strong. The weight saved by this can now be used in the back of the driver where the improved weight distribution brings both club speed, explosiveness and forgiveness to a higher level. This is good news because it makes the club very attractive to both the beginning and the advanced golfer. Golf manufacturers have experimented with a carbon face before but never with success. Apparently TaylorMade has brought the state of the art up to a level where the use of carbon in Stealth drivers has no limits. Very well done.
Of course the top-techniques from the previous model years do not simply disappear down the drain. Innovations such as the Speedpocket, the Twist Face principle and the Inertia Generator have been incorporated into the Stealth, whether or not in a modified version, to maximize performance. All in all, the TaylorMade Stealth 2022 driver is a highly innovative piece of golf equipment that pushes the limit of driver performance.

TaylorMade
TaylorMade SIM DHY Driving Iron (graphite shaft)
The TaylorMade SIM DHY is a powerful, relatively easy to play hybrid driving iron, thanks in part to the combination of the features of classic long irons and forgiving hybrid clubs. A slightly higher ball flight but unprecedented distance.
€279,00 €229,00
In stock

Cobra
Cobra Crown Backpack - Grey
The elegant Cobra backpack looks handsome and is nice and roomy. Made of sturdy polyamide fabric and equipped with a special thick padded compartment for your laptop. Nice quality fabric and zippers, comfortable carrying system.
€99,95 €69,00
In stock